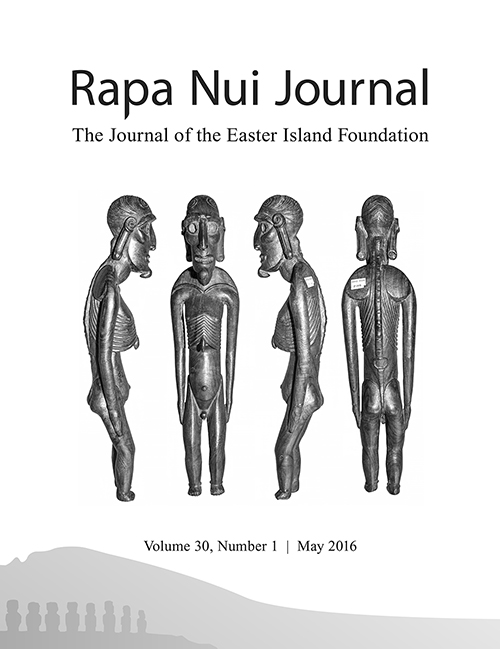 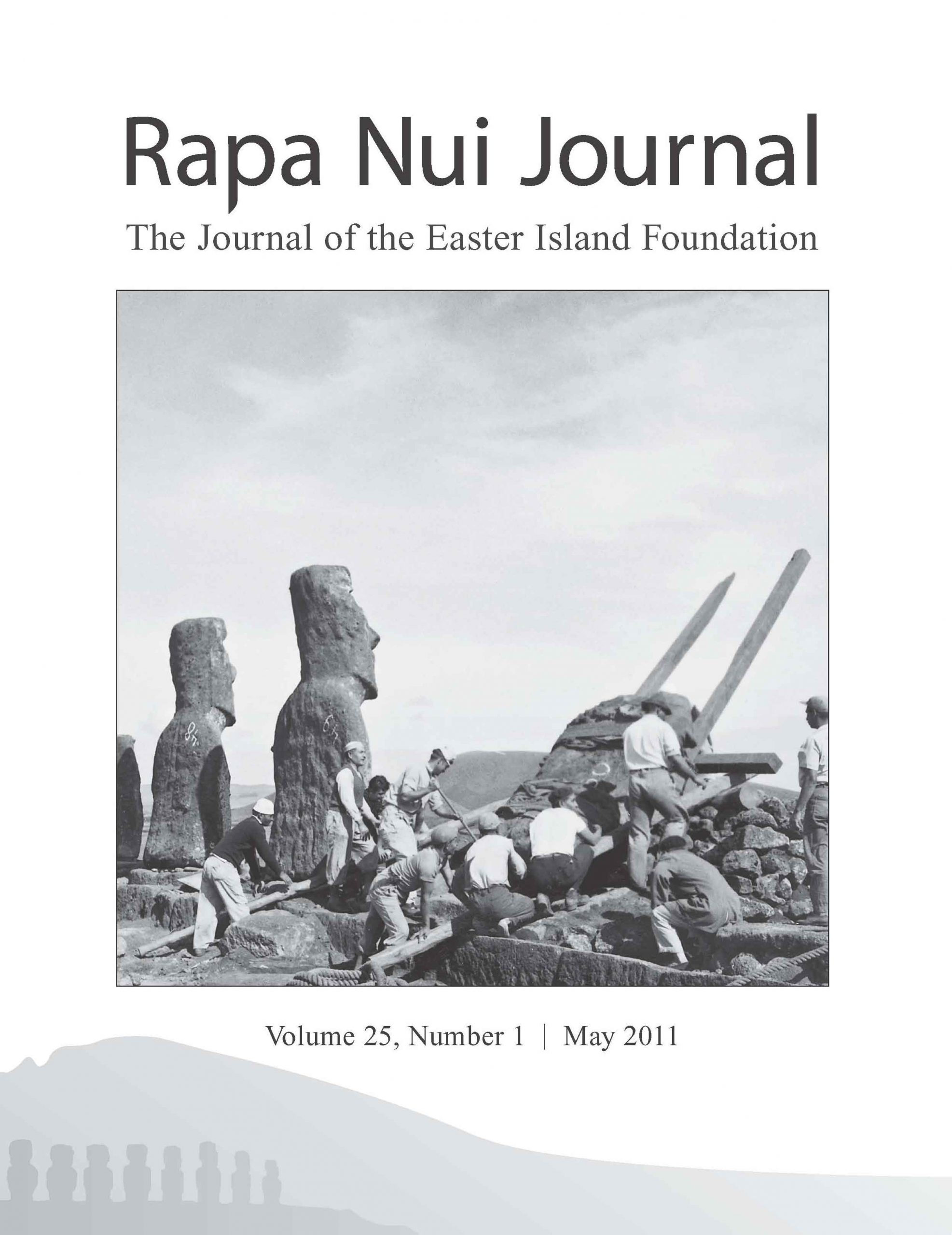 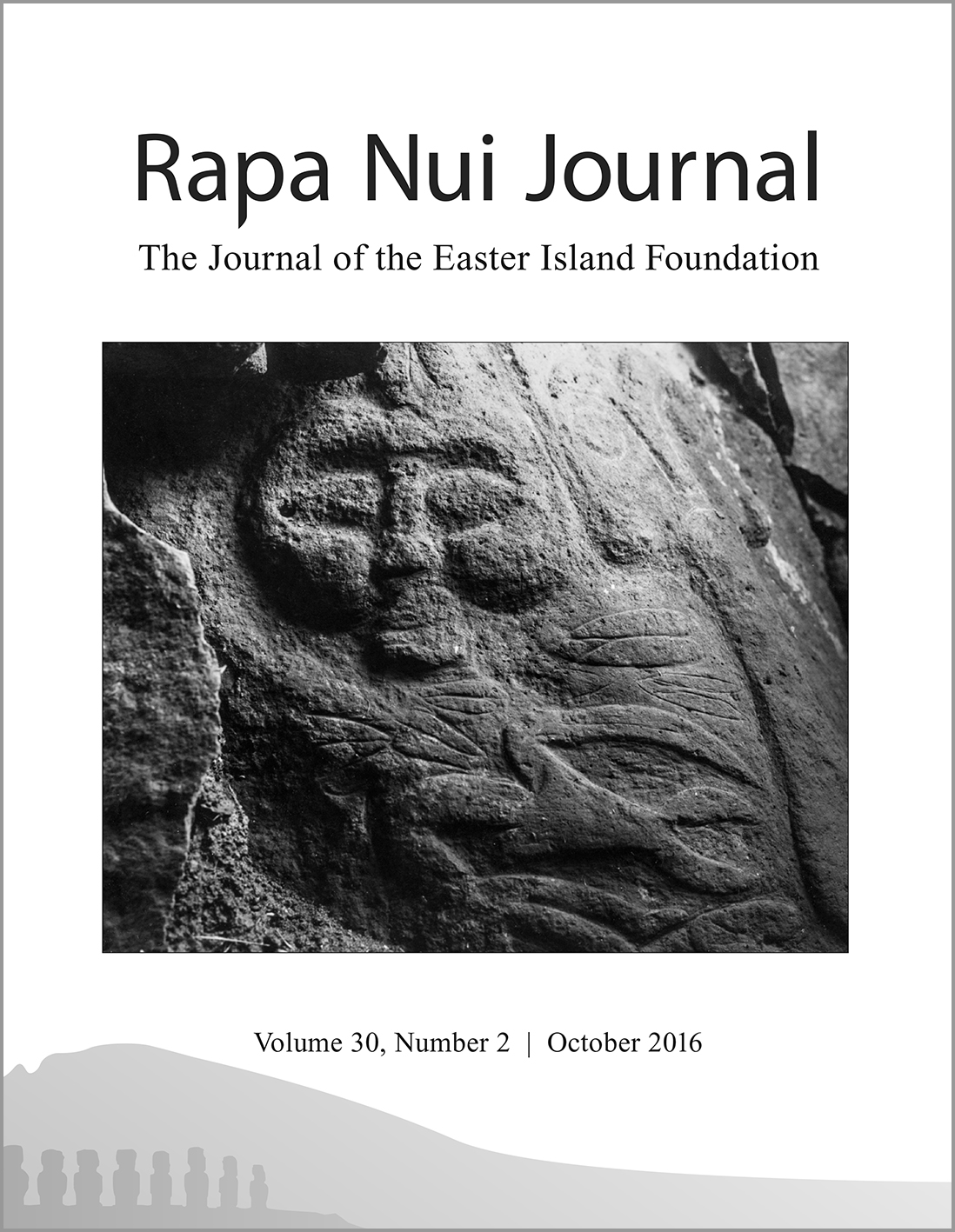 History of the Rapa Nui Journal

The Rapa Nui Journal has been described as the “premiere source for Easter Island events and scientific studies”. The journal covers the subjects of archaeology, anthropology, botany, cultural resource management, cultural and ethnic studies, ecology, geology, field reports, history, linguistics, musicology, and many other topics specifically related to Easter Island, and also includes other Pacific islands. In addition, the journal provides book reviews and Pacific island news. The journal was published in 30 volumes from 1986 through 2016 by the Easter Island Foundation.

The Rapa Nui Journal began in 1986 when Georgia Lee was directing research projects on Easter Island sponsored by the University of California, Berkeley. This program provided paying volunteers whose donations supported individual projects. During these years, small groups came to Easter Island for a few weeks, supplying labor for the projects as well as financial support; crews ranged in age from college to retirees. Most volunteers fell in love with the island; some returned time and again, and many, after leaving, wrote back begging for news about the island, their friends on the island, projects, and in general, asking “What’s new in Hanga Roa?”

Georgia found herself writing far too many letters, trying to respond to everyone. In those days, she only had one rusty typewriter; letters and notes from the island all were hand-written. So, she began a small newsletter which she copied and sent to former members of her crews. It was called “Rapa Nui Notes.” It contained bits of information about what was happening on the island. Georgia added news about research projects and stuck in fillers about new publications, etc. The first newseltter was only 4 pages long! To her surprise, it was a great hit with her former participants.

Rapa Nui Notes grew steadily and attracted the attention of Alan Drake, who offered his skills in producing it; Drake created a more professional looking publication (Winter 1987-88) of 8 pages. Scholars began to submit papers and, as the quality of the content increased, so did the subscriptions. In the summer of 1988, the name was changed to Rapa Nui Journal. Grant McCall dubbed it “the premier source for Easter Island events and scientific studies.” Georgia and her partner, Frank Morin, then produced the journal together from 1991 through 2008. Shawn McLaughlin served as co-editor with Georgia from 2008-2009.

From 2010 through 2012, Thegn Ladefoged and Mara Mulrooney of the University of Auckland took over the joint editorship of the journal.

Mara Mulrooney became the Editor in Chief of the Rapa Nui Journal in 2013 and continued in this position through the final issue in 2016. Under her guidance, the journal grew to a larger, peer-reviewed, bi-annual publication.

In 2019, University of Hawai’i Press approached the Easter Island Foundation to resume publication of the Rapa Nui Journal through a joint partnership, and Mara returned to her position as Editor in Chief. Two issues have been published via the partnership (Vols. 31 and 32) and a third issue (Vol. 33) is scheduled for publication in late 2022. The global pandemic that began in 2020 put a strain on the publication of the journal.

In 2022, the EIF and the Society for Hawaiian Archaeology, in partnership with University of Hawaii Press came to an agreement to create a new open-access journal, the Journal of Polynesian Archaeology and Research. The first volume will be published online in 2023. We are very excited about the partnership and hope that readers of the Rapa Nui Journal will enjoy this new publication. Please read the press release below for more details.

Please visit the UH Press link below for more information:

Through UH Press, content from the Rapa Nui Journal may be accessed online at Project MUSE.

The Easter Island Foundation and the Society for Hawaiian Archaeology to launch a new open-access journal, The Journal of Polynesian Archaeology and Research, in a partnership with the University of Hawaii Press in 2023

We are thrilled to announce a new partnership between the Easter Island Foundation, the Society for Hawaiian Archaeology and the University of Hawaii Press to publish a new digital open-access journal, the Journal of Polynesian Archaeology and Research. The first issue will be published online in 2023. Please read the announcement below for more details.

PDFS OF BACK ISSUES AND INDIVIDUAL ARTICLES

Please note that selected issues, as well as individual articles, are available in pdf format.  For access, visit the Tables of Contents page on the right sidebar.