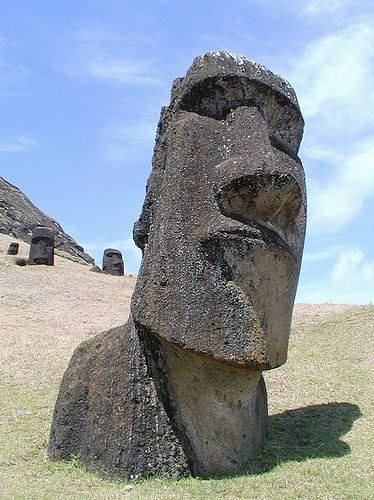 Rapa Nui’s ahu (shrines) vary in size and form. There are at least 360 on the island. “Image ahu” are those with statues (moai). Ahu have consistent features: a raised platform made of fitted stones and rubble, a ramp that is often paved with beach cobbles, called poro, and a leveled court in front. Image ahu had from one to 15 statues standing on each platform. Statues were placed to look over a ceremonial area and village, their backs to the sea.

The appearance of stone statues on Easter Island is neither mysterious nor unexpected. Monolithic stone statues are found in the Marquesas, Austral Islands, and Tahiti. And, although each island group displays some variation in form and style, they are clearly related and spring from common belief systems and religious practices. 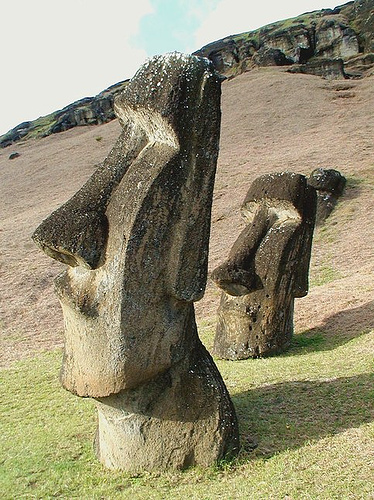 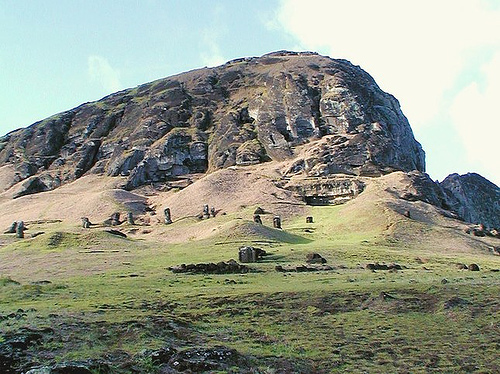 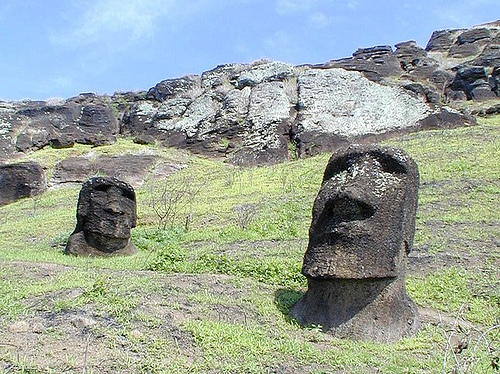 4 Photos above by Paul Horley

The exact number of moai on Rapa Nui is unknown because many lie buried in piles of rubble or beneath the soil at the statue quarry; the estimates vary from 800 to 1,000. Moai are found in nearly all localities around the island, although the greater number are in proximity to the main quarry, Rano Raraku, located on the south coast. Practically all the statues were carved from this volcanic cone.?

The crater where they were fashioned is an extraordinary site filled with incomplete statues in all stages of carving. Great hollows in the cliffs mark places from which statues have been removed. More than 230 others were moved to various locations around the island and erected on platforms. Some lie broken and abandoned where they fell during transport.?

Statues have a considerable size range, from 6 feet [2 meters] to over 30 feet [9 meters] tall. One giant moai still attached to the matrix of rock in the quarry is over 65 feet [20 meters] long, and has an estimated weight of 270 tons. Perhaps it remained unfinished when the carvers realized that it would have been impossible to move.

To walk around this remarkable quarry site, littered with statues in all stages of fabrication, is an unforgettable experience. Some moai lie on their backs; others are nearly vertical. As the carvers worked, the front and sides were carved first. When nearly finished, only a keel attached the back of the statue to the rock. Gradually it was pecked away, the figure was moved downhill, and stood up in a hole dug into the hillside. Then the back was completed and at last the moai was ready. 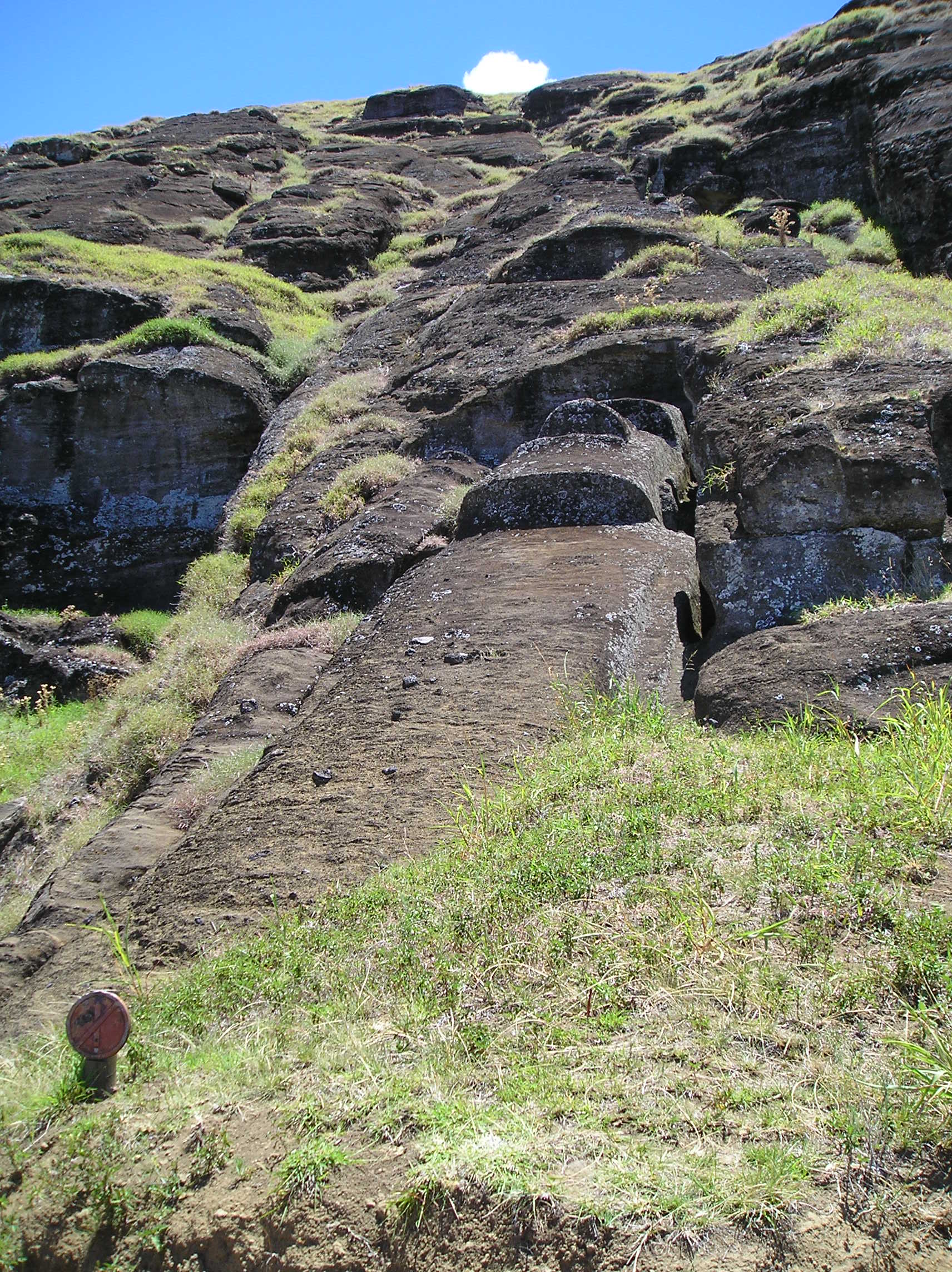 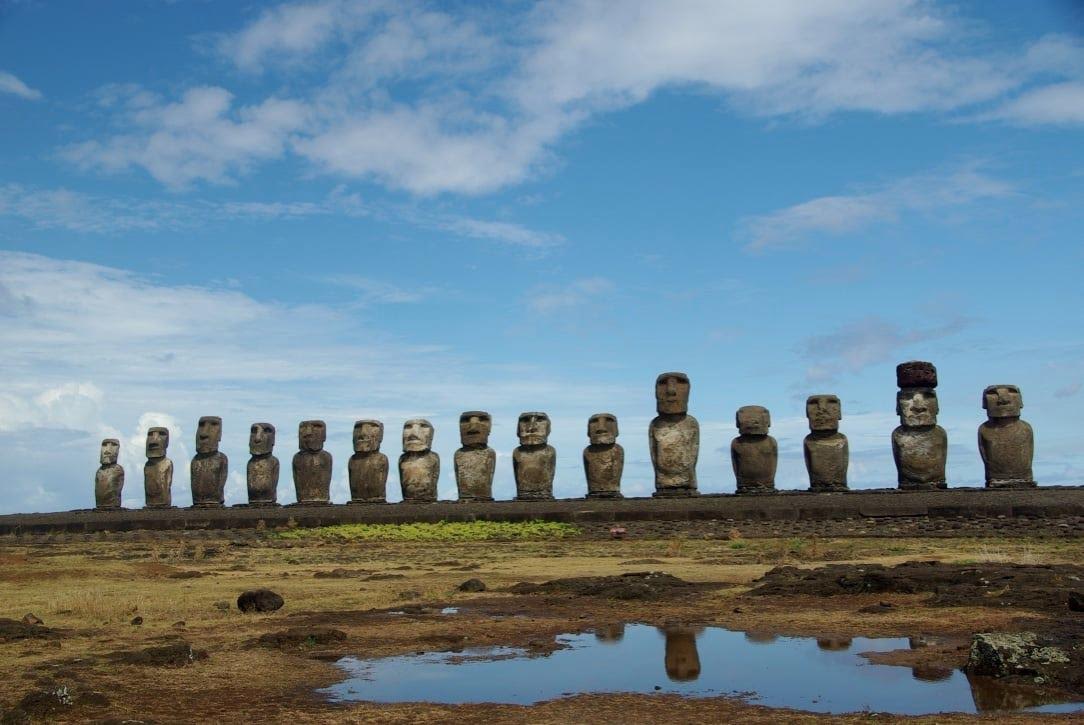 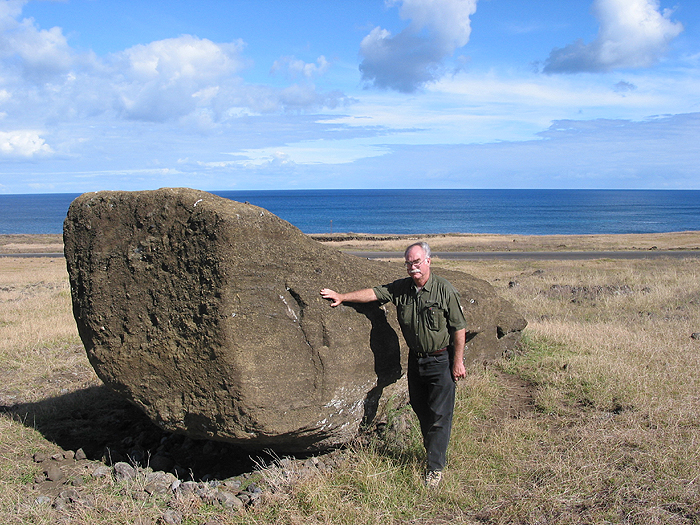 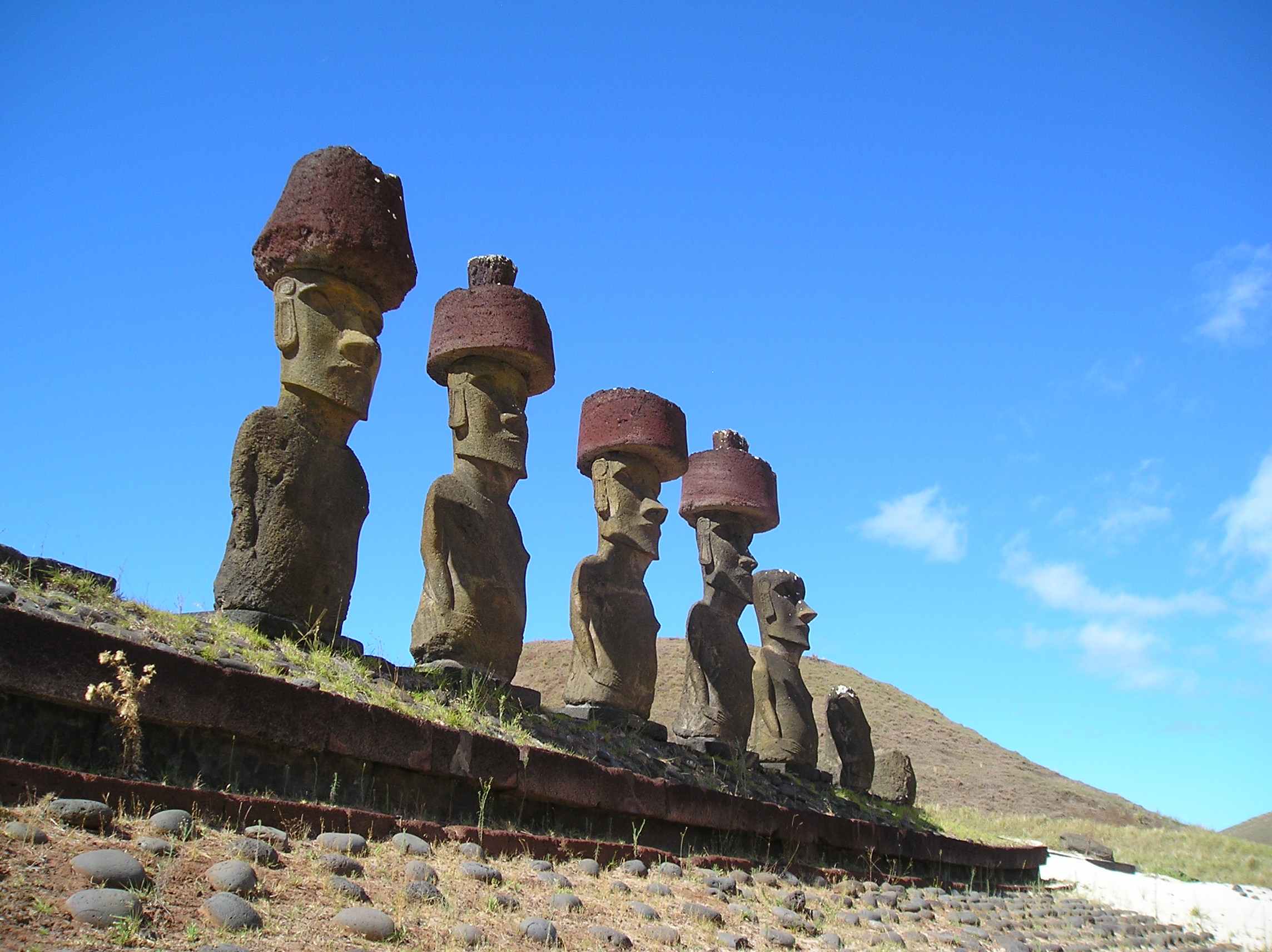 Once completed, the statues were ready to be transported to the ahu for which they had been carved. Scholars continue to debate how this major effort was accomplished. Island legends claim they walked from the quarry to their ahu. Some researchers believe the moai were laid on wood sledges and moved along by means of log rollers. Others think they were moved while standing up on a sledge. One method suggests rocking the statues along on a wooden bipod/fulcrum. It is probable that the means of transport varied from time to time, depending upon size and form of the statue involved. Aside from the “walking” theory, everyone proposes that wood was involved, and a lot of rope.

Archaeological study of the roads along which the statues were moved has cast doubt on previous theories for moving the moai. Charles Love, an archaeologist from Wyoming, found that the ancient roadbeds were not flat and leveled, but were V-shaped in profile.

Once a statue reached its ahu, it was raised by means of wood poles and stones placed beneath it. Gradually the statue became upright as the pile of small rocks grew. After the statues were placed upright on their ahu, the next step was to carve eye sockets into which coral and stone eyes were placed. This “activated” the power (mana) of the statue. One of these eyes is on display at the island museum.

Many of the standing statues had large “topknots” (pukao) placed on their heads. These great cylindrical pukao may have signified hats, hair tied up into a knot, or perhaps a headdress. They likely had some connection with status and power. The pukao came from a quarry at Puna Pau, just inland from the village of Hangaroa. How these huge cylinders were set on top of the statues is still under debate. The pukao at one site, Te Pito Kura, is nearly six feet [2 meters] in diameter and weighs around 11.5 tons. It would have been a significant engineering feat to raise it onto the head of a standing statue. Some archaeologists have suggested the pukao were lashed to the statues and raised together as a unit.