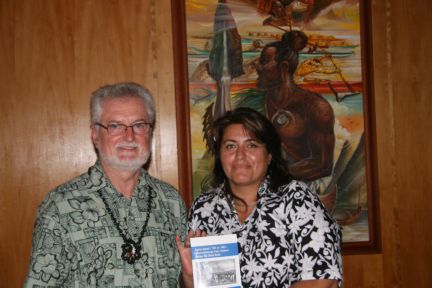 Dave (shown with the former Mayor of Easter Island) is a retired attorney. He and his wife Gail became enchanted with Easter Island while on Georgia Lee’s Millennium Tour to Easter Island. They enjoy adventure travel and scuba-diving (Dave calls his scuba experience off Motu Nui “spectacular”). 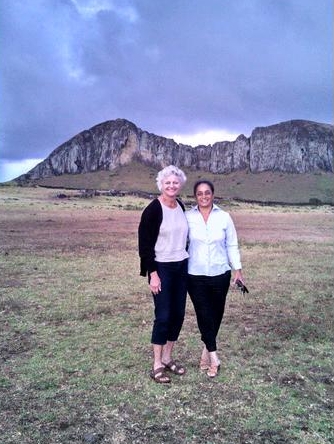 Marla became intrigued with Rapa Nui during her first college class at the University of Wyoming in 1969, taught by William Mulloy. Marla’s has a Master’s degree in Anthropology on the subject of the Rapanui language. Marla was the chairperson of the EIF Scholarship Committee for many years and is pictured here with Viki Haoa Cardinali, Rapanui language expert and teacher. Viki and Marla are founding members of the scholarship program administered by the EIF. 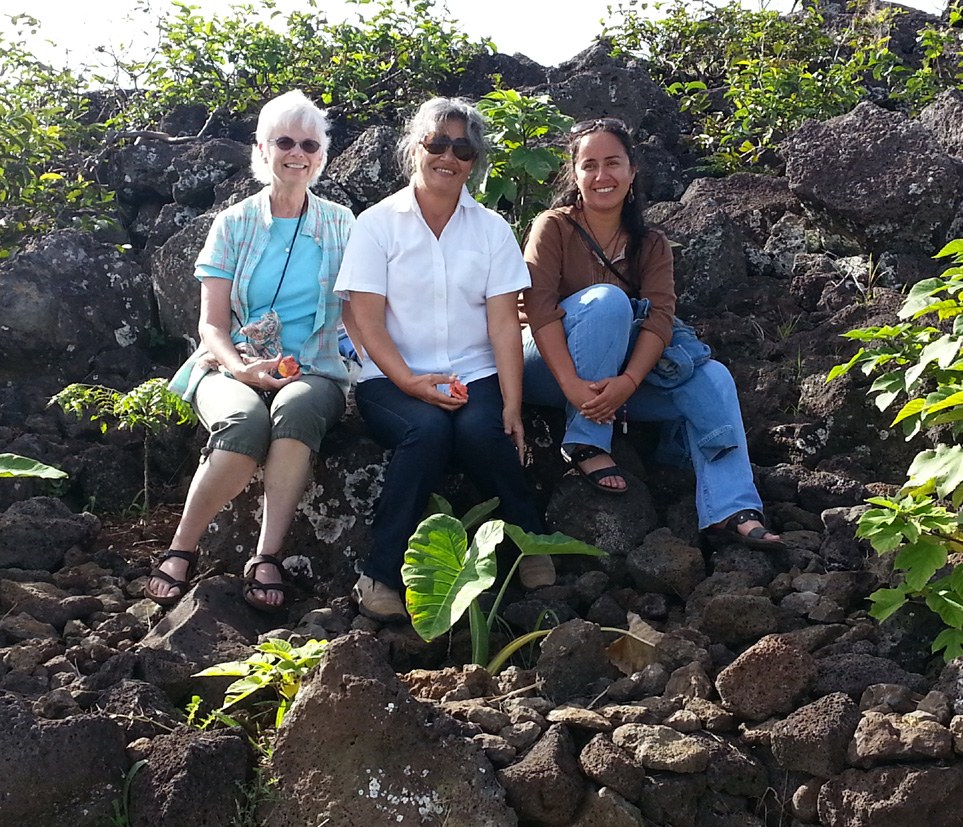 (Shown here with Sonia Haoa and Melinka Cuadros Hucke) Kathi first visited Rapa Nui on an Earthwatch expedition in 2007; she returned to volunteer for Earthwatch in 2009, 2010, 2011, 2012, and is eager to assist with future research.  Later trips were with family and friends to share the uniqueness and beauty of the island.  Kathi has over 40 years experience as a classroom teacher and school library media teacher. Kathi heads the EIF Scholarship program. 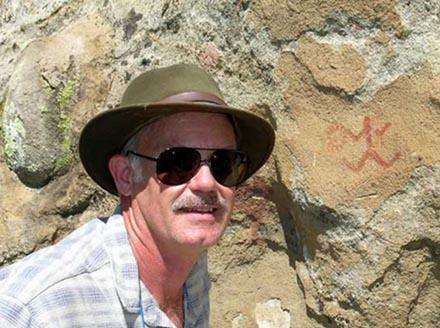 Mike is a retired project manager for an energy company, and has an MBA from the University of Southern California. Mike has worked extensively with archaeologists in the field documenting Native American rock art sites across the southwestern United States. 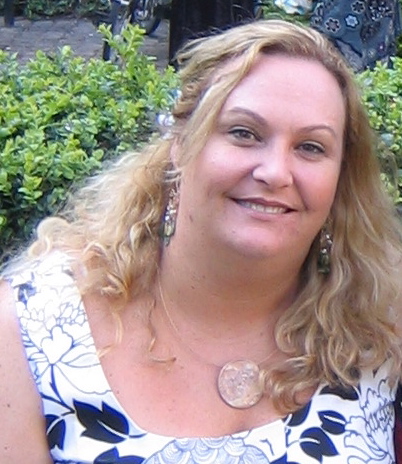 Hilary Scothorn lives in New Zealand and is the Secretary of the Pacific Arts Association. Her Master’s degree in Art History was on the subject of Polynesian and non-Western art. 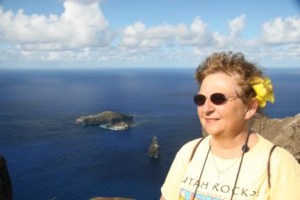 Gail Rose is a retired science teacher. Dave and Gail enjoyed their first visit to Rapa Nui so much that they returned twice more. 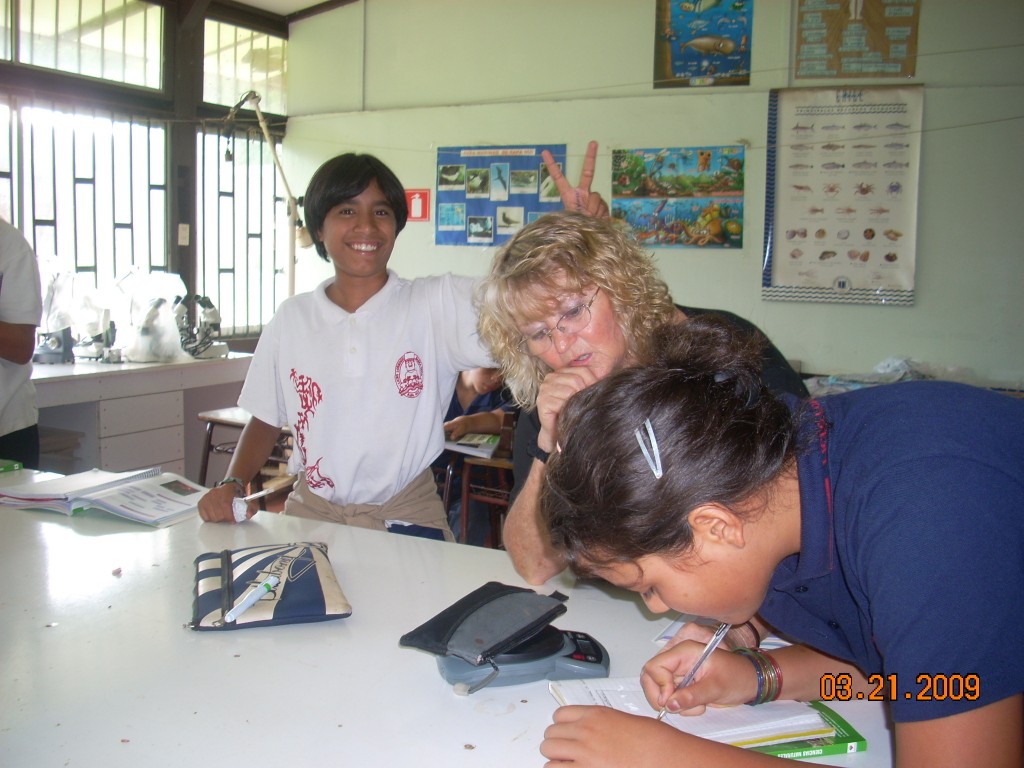 Elaine Crumpley is a retired science teacher. She has spent time on Easter Island teaching science classes to Rapanui students, which was an “amazing experience”. Elaine is a member of the EIF Scholarship Committee. 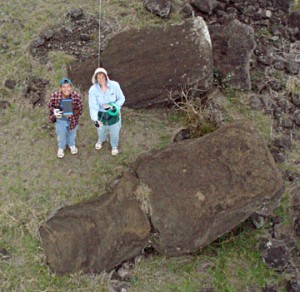 Elaine Dvorak and her husband Don have conducted amazing kite-aerial photography projects on Easter Island and in Hawaii. Their aerial photos showing archaeological sites have provided valuable information to archaeologists on the ground. 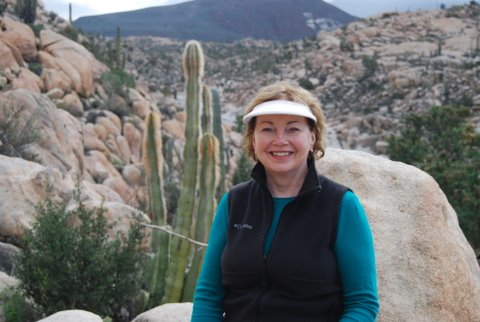 Kay Sanger fell in love with Rapa Nui while working there with Georgia Lee’s research project in 1983. She has returned to the island many times, and works to promote education, research and preservation. Kay has an MA in Archaeology from UCLA and is the author of several books on travel, archaeology and rock art, including the EIF’s best-selling guidebook, Easter Island, The Essential Guide. Kay is a member of the EIF Scholarship Committee and a former President and Vice-President of the EIF. 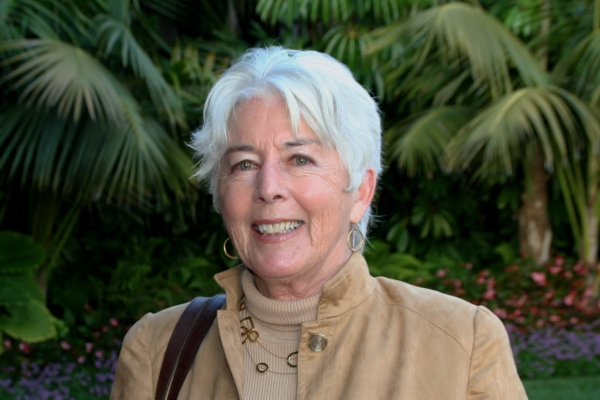 Joan Seaver Kurze’s interest in anthropology led her to UCLA where she earned her doctorate. Her fieldwork on Rapa Nui focused on the modern woodcarvers of the island. Joan was the founding President of the EIF and is the author of Ingrained Images, Wood Carvings from Easter Island, the companion book to an exhibition about Easter Island wood carvings at the Maxwell Museum at University of New Mexico in 1997. In 2018 Joan published Saints on Easter Island, detailing the history of the woodcarvings in the Church of the Holy Cross on Easter Island. 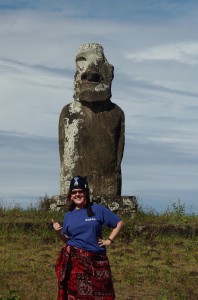 Caroline Roe comes to the Easter Island Foundation by way of her passion for tiki and Polynesian pop culture, and has been the liaison with the EIF from Fraternal Order of Moai (FOM) since 2009. She is currently President of the FOM Foundation, the charitable arm of FOM. She and her husband Rob visited Rapa Nui in 2008 and enjoyed exploring the island, capturing the beauty of the island through photography, and she looks forward to returning. Caroline has a BS from Denison University in Psychology, and an MA from Duke University in Cognitive Psychology, leading to her career in Marketing Research. Caroline is a member of the EIF Scholarship Committee. 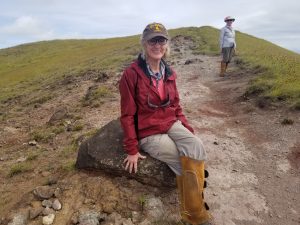 Julie Francis, is an archaeologist based in Wyoming. She has directed excavations at Clovis Mammoth Caves, Trappers Point, Legend Rock State Petroglyph sites. Native American rock art has been her primary research focus since the late 1980s. She has had the privilege of working with a variety of tribal representatives to gain a much richer and deeper understanding of rock art from indigenous perspectives and the critical role these sites play in the sacred geography of indigenous religious belief. Dr. William T. Mulloy was her undergraduate advisor at the University of Wyoming, and Julie took every class he taught. She was fascinated by his perspectives on Polynesian and Rapa Nui prehistory, and was deeply touched to visit Dr. Mulloy’s grave on Easter Island in 2008, and to learn of the reverence and honor in which he is held by the Rapanui people.

Rachel Lee first traveled to Easter Island in 1992 with her grandmother, archaeologist Dr. Georgia Lee. Rachel lived with a Rapa Nui family for six weeks, and fell in love with the people, culture and beauty of the island. She hopes to uphold her grandmother’s legacy of engagement with Easter Island, and to support the Rapa Nui in their vision for the future. 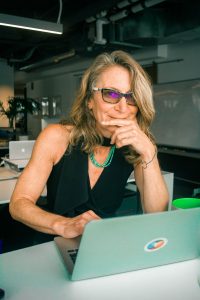 Elana Yonah Rosen has been collaborating to invite access to education for all since 1991. Her contributions include creating EDUTOPIA.org; founding Just Think, offering kids from diverse and distressed communities cameras and computers to tell their stories through filmmaking; and supporting young people via World Merit, a radically inclusive entrepreneurial organization with members from 150 countries. She looks forward to supporting young people on Easter Island with the resources needed to honor the Rapa Nui culture will allow the next generation to both preserve the past and explore their vision for the future. 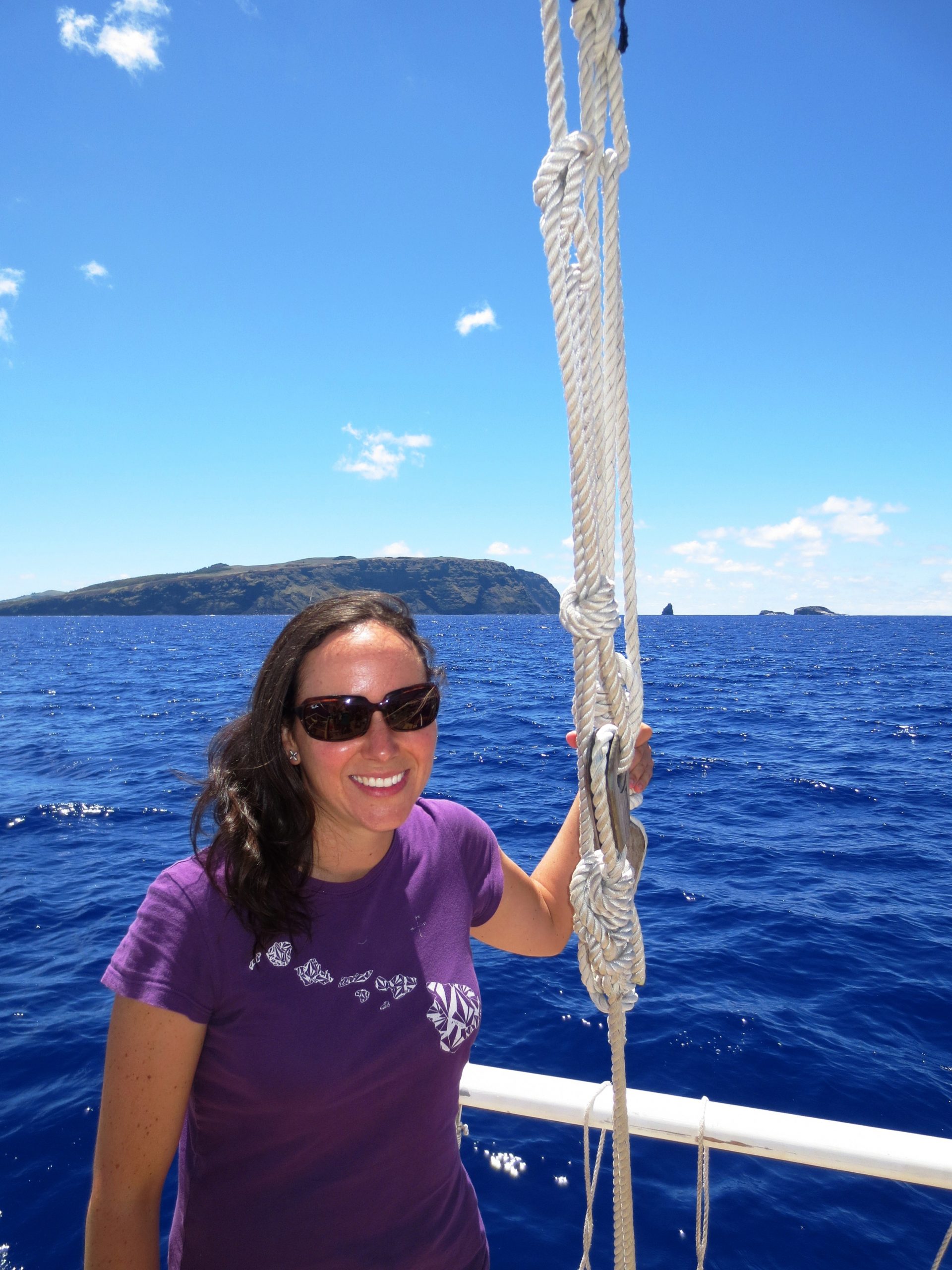 Mara Mulrooney began working in the field of Pacific Archaeology in 2001. In 2003-2004, she co-directed field projects on Hawai‘i Island while working towards her Master’s degree at the University of Auckland. In 2005, she began her career in cultural resources management, working at International Archaeological Research Institute, Inc. (IARII) as a GIS Specialist/Archaeologist. She returned to Auckland to work towards a PhD, focusing on landscape archaeology on Rapa Nui (Easter Island) and also collaborating on archaeological research projects in Hawaii and New Zealand. While living in Auckland, New Zealand, Mara taught undergraduate courses at the University of Auckland and also worked in CRM at Geometria Heritage Management and Archaeological Services as an archaeologist. Following completion of her PhD in 2012, Mara relocated to the island of O‘ahu, where she was the Bishop Museum’s anthropologist and director of Cultural Resources. She joined Pacific Legacy’s Kailua office as a Senior Project Supervisor in 2019 and is now a Principal Investigator and the Chief Operations Officer for the Pacific Region. Mara has served as the editor of the Rapa Nui Journal since 2010. Since 2013, Mara has been an adjunct faculty staff member at the University of Hawai‘i at Manoa, where she has taught Hawaiian Archaeology and facilitated internships for students. She has served as the President of the Society for Hawaiian Archaeology since 2020. 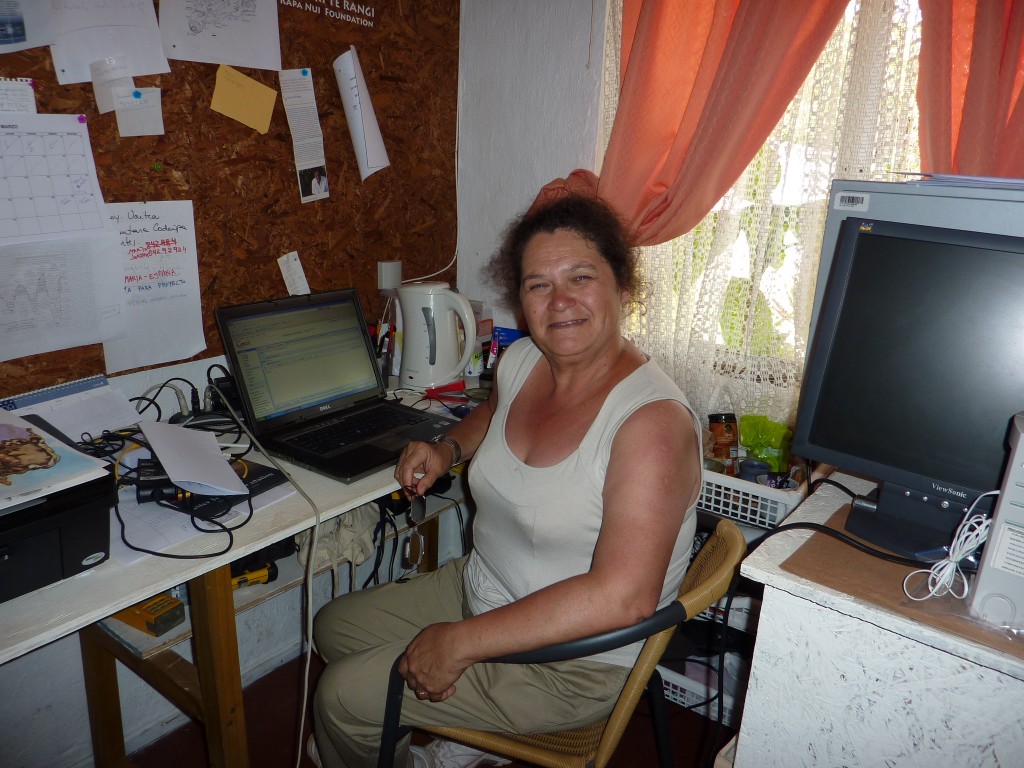 Ana Betty Haoa Rapahango was the Librarian at the Biblioteca Rapanui at the Fonck Museum in Viña del Mar for many years. Betty is an Easter Islander and has an MA from the University of Chile. She assists the EIF as a translator for the Rapa Nui Journal and for EIF’s Scholarship Program. 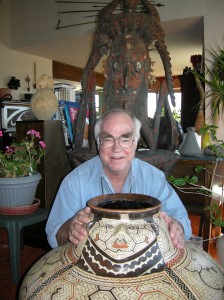 Charles Love, Emeritus Board Member, is a geologist and archaeologist. He taught at Western Wyoming College and has undertaken extensive studies on Easter Island, with special interest in the moai roads and the prehistory of Ahu Tongariki, as well as many other Easter Island ahu.